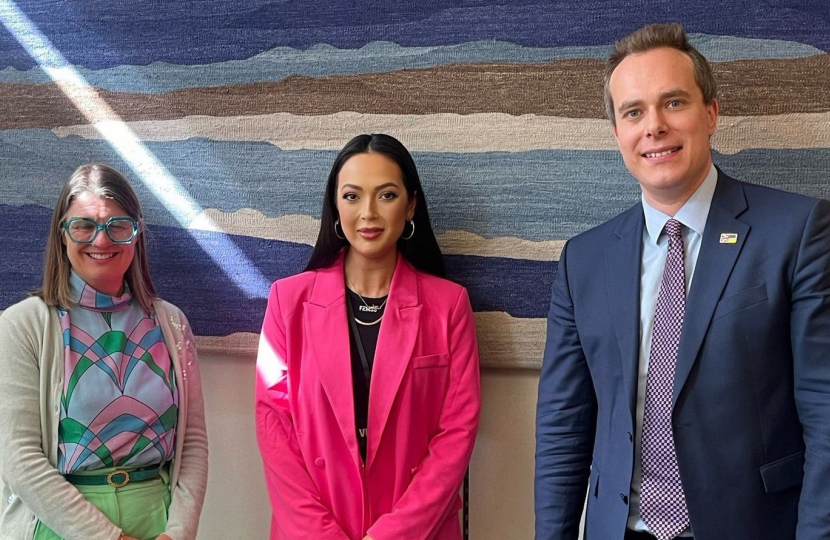 This week I took a constituent, Sharon Gaffka, to meet the Safeguarding Minister, Rachel Maclean. Sharon has been campaigning on the issue of spiking.

Spiking is typically done by slipping a drug into someone’s drink, although it is sometimes done by small needles that are stabbed into people’s limbs.

Sharon has been spiked more than once. She wrote for Grazia magazine about her experience of being spiked in July 2020, the first day that bars and restaurants had reopened. Where she would usually have left the venue she was at in a cab, she instead left that day in an ambulance.

While an observer might have concluded she had just drunk too much – a common assumption people make when they see the behaviour of someone who has been spiked – she hadn’t. The effect of the drug meant she passed out in the bathroom, bumping her head on a toilet.

She had no memory of what had happened, but the hospital would find a substance similar to GHB in Sharon’s blood, which at no point had she had in her possession or taken. It was clear someone had slipped this into her drink without her realising, which led to her beginning her campaign.

When Sharon came to see me at the beginning of January she explained that she had received over 1,000 testimonies from others about their experience of spiking. Those who had experienced it ranged in age from 14 to 65 years old.

People who spike others typically do it as a prelude to a sexual assault or stealing someone’s possessions, though not always: some younger individuals do it to each other as they think it will be funny to see what reaction it causes. In every instance it is very dangerous – to physical health, to mental health and to the confidence people have about going out for a night with friends and family.

This is why I told Sharon I would try and help her in any way I could. I was pleased when the Government announced last week that it would move the classification of GHB, the main drug used in spiking, from Class C to Class B. The maximum prison sentence for being in possession of the drug will go from 2 years to 5 years, but if you’re found supplying or manufacturing it, you could be liable for up to 14 years in prison.

It’s an important step in ensuring the crime is taken more seriously: too often victims are dismissed as not having taken enough care of themselves. I took Sharon to meet the Safeguarding Minister so her experience could inform the Government’s work on this issue and I will keep supporting her great campaign.