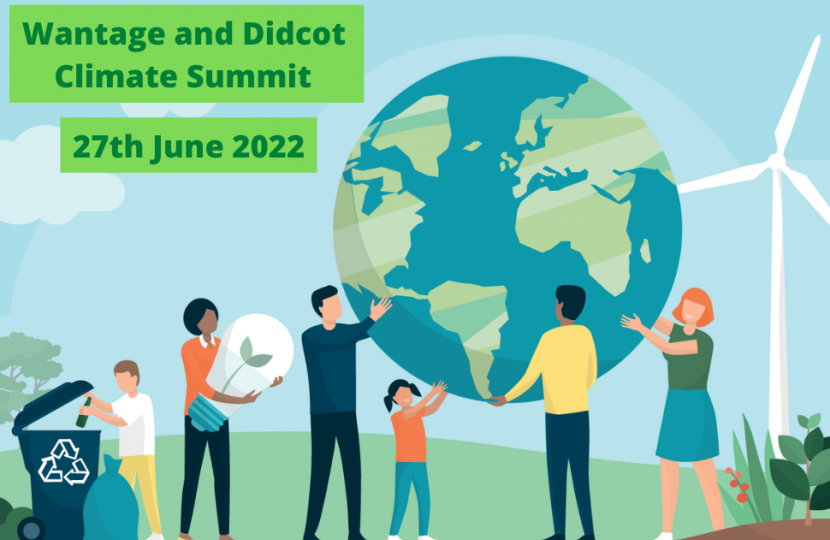 Last week, I held my second annual climate summit. In 2021, I held a pre-COP26 summit and given the feedback from it was so positive, I decided to make it an annual event. Over 120 constituents signed up to attend and we had a series of interesting talks and presentations from local and national experts – as well as children and young people from local primary and secondary schools.

As some readers will know, in addition to my work with the Conservative Environment Network there are 2 big things I’ve been campaigning on regarding the environment in the past year. One is the Local Electricity Bill, which I am the lead parliamentary sponsor of and which now has the support of over 300 MPs. This is designed to make it easier for local, community organisations which generate renewable energy to be able to sell it to local people.

The second thing is to see new homes built to the latest environmental standard the government sets, not the one that existed when planning permission was granted – which can be several years earlier when standards were lower – once a certain time has elapsed. Both renewable energy and the way homes were built were key themes at the summit.

The first session was children from 4 local primary schools telling us what they thought children, adults and the government should all do in order to tackle climate change. Later in the day we had 3 secondary schools answer the same question and both sets came up lots of ideas, from using different lawn mowers, to free bus passes and encouraging people to reduce the amount of new toys and new clothes they buy.

The keynote speaker was Alok Sharma, President of COP, who talked to us about the commitments that countries have made – we’ve gone from a third of countries making net zero commitments to 90% during the UK’s presidency and the UK has committed with others to ending fossil fuel financing by the end of 2022 – and the barriers that need to be overcome to take other countries with us.

We had a session on renewable energy, talking specifically about solar, wind and bioenergy and the progress they’ve made in becoming suitable alternatives to fossil fuels. And we had a session showcasing some of the innovative work being done at Harwell by RAL Space and Astroscale (which is working on clearing space of some 150 million bits of debris).

As ever, we had a lively discussion with lots of interesting questions from the constituents who attended. I am already looking forward to next year’s summit. In the meantime, if you missed it this year, you can watch a recording on my website ww.david-johnston.org.uk.