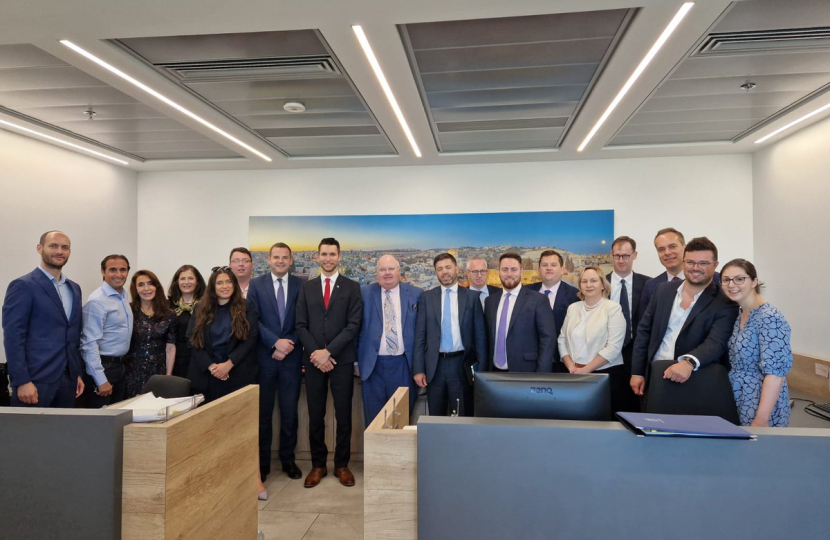 The Israeli-Palestinian conflict is something I am written to about regularly by constituents and, having not been to the region before, I decided to take part in this visit to understand the situation more for myself, rather than relying on the second and third hand accounts we usually get from people in this country.

It was organised by Conservative Friends of Israel (there is a Labour equivalent which organises delegations by Labour MPs), but contrary to what you might expect, the visit was far from one-sided or dogmatic.

During our visit we met with the Israeli Deputy Foreign Minister and the Prime Minister of the Palestinian Authority. We had Israeli tour guides and Palestinian tour guides. We met with business leaders, charities and journalists, and we visited Israel’s borders with Lebanon and with Syria.

We had a packed itinerary. The visit was fascinating and I can’t do it justice in a few paragraphs but here are 5 things I learnt more about.

Firstly, Israelis do not shy away from criticising their Government – including on the topic of settlements – just as people in the UK do not. They can do so because the country is a democracy that allows them to do this, unlike some of the other countries in the region.

Secondly, while we in the UK generally only hear about conflict between Israelis and Palestinians, in many parts of Israel both live side by side perfectly peacefully (21% of the population is Israeli-Arab).

That said, security issues loom large. Israel is bordered by several countries committed to its destruction. During the visit we went into one of tunnels which the terrorist group Hezbollah spent 10 years illegally building from Lebanon into Israel in preparation for a major attack, before Israel flooded it with cement. Israel is constantly developing its methods of defending itself against rockets being sent into its territory. It is hoped the 2020 Abraham Accords have the potential to create better relations across the region.

Fourthly, while stories of conflict dominate, Israel is a place of great innovation. For example, did you know it ranks 7thin Forbes list of most innovative countries (the UK is 18th) and recycles around 90% of domestic wastewater, making it the world leader in water reuse?

Lastly, a 2-state solution is something almost everyone is committed to. One of our Palestinian guides said some young Palestinians are starting to support a ‘one state solution’ but most people you talk to think the only viable proposition is for Israelis and the Palestinians to each have their own state.

David welcomes Ukrainians and their hosts from North Moreton to Parliament

Parliament is in recess but I popped down today to meet Ukrainian refugees and their hosts from North Moreton, who we arranged to have a tour of parliament.