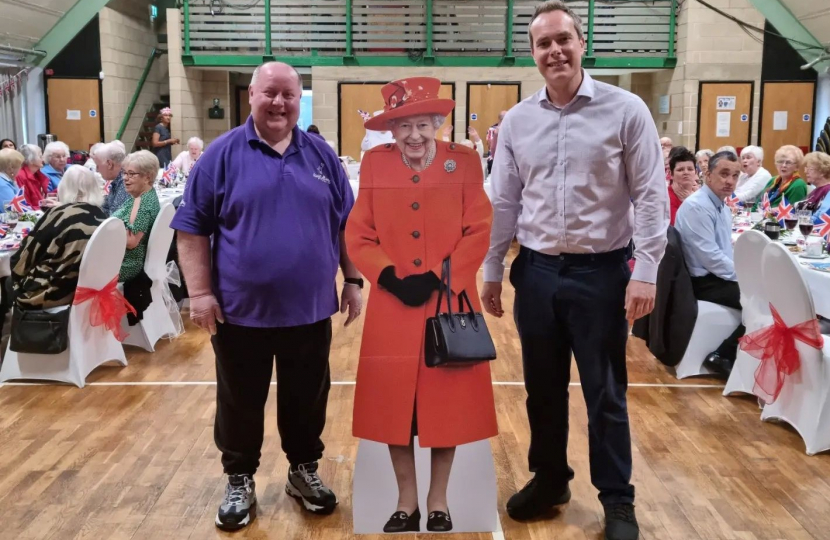 I’m writing this straight after 4 days of attending Platinum Jubilee events locally. I try and get to as many events in the community as I can all year round, but I was especially keen to get to as many Jubilee events as I could. Many were understandably at the same times so I had to miss some, but they were all great fun.

I started in Didcot with the Jubilee Celebration at Civic Hall, where the weather thankfully stayed sunny and dry and children filled the sandpit. I enjoyed the British Legion Parade in Faringdon, where the weather was a bit wetter but a delicious Union Jack cake had been made by Lushlooking Cakes, which people queued up to share. I spent time at both the Harwell Feast and the Grove Extravaganza, making it in time to the Hanney Fayre to enjoy yet more cake on the grass.

At the Big Jubilee Lunch in Wantage Market Place the rain didn’t stop people dancing to the singing of the Vintage Sweethearts, while waving their Union Jacks! I had a great time at the ‘tea party for the oldies’ in Grove, put on by the fantastic Ray Collins Trust, where around 50 elderly people were given a feast as the concert from the night before played on a big screen and a good time was had by all. Meanwhile, in Wallingford, plenty of people turned out for the picnic despite the rain – and the rain certainly didn’t put off the many children rolling down the bank!

Along the way there was lots of food, plenty of games, Vikings, morris dancers, animals and an impressive array of classic cars, with people putting aside their concerns to celebrate the reign of our wonderful Queen Elizabeth the Second.

Like most people, I have never met the Queen, but I am full of admiration and love for her. Most of us are still trying to work out exactly who they are in their mid-twenties, not having the weight of becoming head of state thrust upon them. In her 7 decades of service she has been a figure of inspiration and a figure of stability, standing above the fray to give the nation much-needed solace in times of trouble and strife in the country.

I now work in one of the most heated fields, where passions run high and the tone is all too often too angry and divisive. What the country most appreciates about the Queen is how, whatever is going on, she serves us always with the best interests of the nation at the forefront of her mind.  No-one has ever served this country so well for so long. Long may her reign continue.