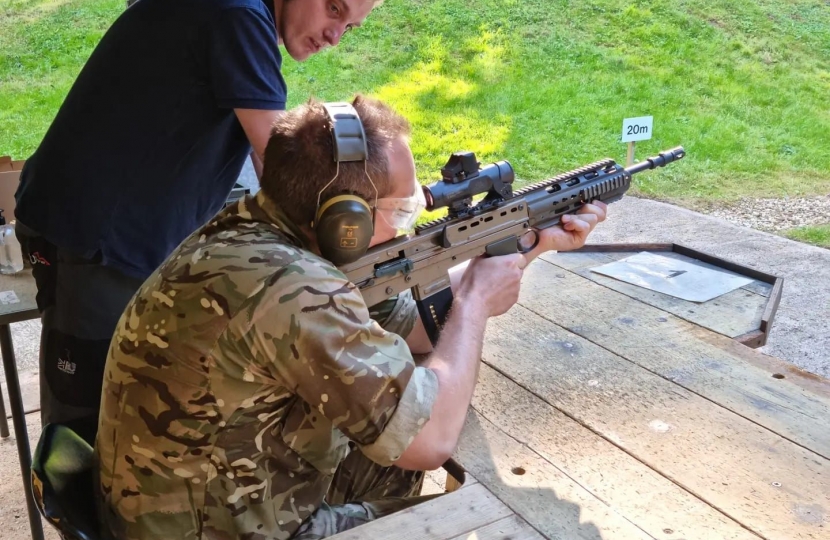 This year I am taking part in the Armed Forces Parliamentary Scheme (AFPS), a year-long programme to give MPs and Lords from all parties a better understanding of life in the armed forces. There are a limited number of places each year and it is a competitive process, so I was pleased to be accepted. Although some sessions are done as one big group, you pick a strand of activities – army, navy or air force – and I picked the army given my dad was in the army for 18 years.

It was a coincidence that we all kicked off the Scheme at the Defence Academy of the UK at Shrivenham, for a 2-day induction. We had a very full programme, with a wide range of talks about each of the forces and some of the overarching principles that govern how they operate, such as the principles of war.

The aim of the Scheme is to give us as realistic insight as is possible, while obviously recognising that nothing we experience will be anywhere close to what the actual members of the armed forces experience. To that end, we wear broadly the same uniform as everybody else does; sleep in the same accommodation; try the same rations; and try some of the same exercises, from the fitness ones to the firing of weapons.

While none of us will ever know what it is like to serve in the forces, I already feel I know more now than I did before the Scheme began. And it was fascinating to learn more about everything from the UK’s 14 territories overseas to the structure of the forces and how they are approaching challenges from cyber warfare to climate change.

We also talked at various points about the success of Operation Pitting, the successful removal of British personnel and Afghans from Afghanistan last month. Although they had not known the precise date it would be required, it had been planned for months and people are rightly proud of how it went.

I joined the AFPS because I already had huge respect for our armed forces, but I know by the end of my participation my admiration for them will have only grown.

P.S. In case you wonder why you’re not hearing me talk about education in the House of Commons anymore, it’s because I have just been appointed Parliamentary Private Secretary (PPS) to the Department for Education. PPSs are unpaid, non-ministerial posts, but they mean you’re technically classed as a member of the Government and you can’t speak on the responsibilities of the department you’re assigned to. It’s a minor drawback – I’m otherwise delighted to be appointed given my pre-politics career working with young people.